Stories of Resilience and Change. 10 Social Reformers Who Fought for India

Indian women have always been the epitome of beauty, strength, and intelligence. Today, the success of Indian women across various walks of life has proven that they have earned this reputation very deservingly. If you look deeper you will realize that one of the major contributors to Indian society has been the active participation of some very focused and dedicated women.

The women activists have played a significant role in changing many social evils and have been a shining beacon of hope. Some of them have displayed exemplary devotion in their respective fields.

Here are 10 Indian women who deserve a standing ovation:

Popularly known as the “Iron Lady of Manipur”, Iron Sharmila is the most recognisable face of the conflict-ridden state in the North East. Despite not clearing her class XII, she has become an “icon of public resistance” in her state. For Irom, her father has had a great influence on her life.

On November 2, 2000, she began a hunger strike after the “Malom Massacre” where 10 people were killed, which had a major impact on her. Having refused food and water for more than 500 weeks, she has been recognised as “the world’s longest hunger striker”. On International Women’s Day, 2014 she was voted the top woman icon of India by the MSN Poll.

Though Irom has refused both water and food, the government continues to force-feed her. Every year, she is arrested on charges of attempting suicide. It has been 16 years since she started her movement, but her resolve hasn’t broken yet. She states that she will only eat when the Indian government will repeal the Armed Forces (Special Powers) Act in the seven states of Eastern India. 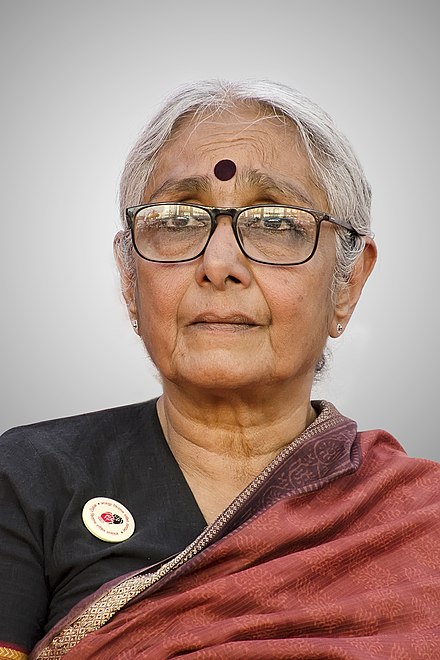 She is best known for her efforts to fight corruption and promote government transparency. Aruna Roy’s parents have had a major impact on her life; her father instilled a strong social conscience, while her mother taught her to be independent-minded. After studying at Aurobindo Ashram in Pondicherry and Indraprastha College in Delhi, Aruna started teaching. But, she realized that teaching wasn’t her passion as she aimed to become a civil servant. She cleared the Indian Administrative Services (IAS) examination in 1967.

Aruna is known as a prominent leader of the Mazdoor Kisan Shakti Sangathan (MKSS), a social and grassroots organization for the empowerment of workers and peasants. In 2005, she played a crucial role in establishing the Right to Information Act (RTI). Aruna has received various awards for her service to society, such as the Ramon Magsaysay Award for Community Leadership in 2000, Lal Bahadur Shastri National Award for Excellence in Public Administration, Academia and Management in 2010. In 2011, Aruna was named one of the ‘100 most influential people across the world by Time Magazine. 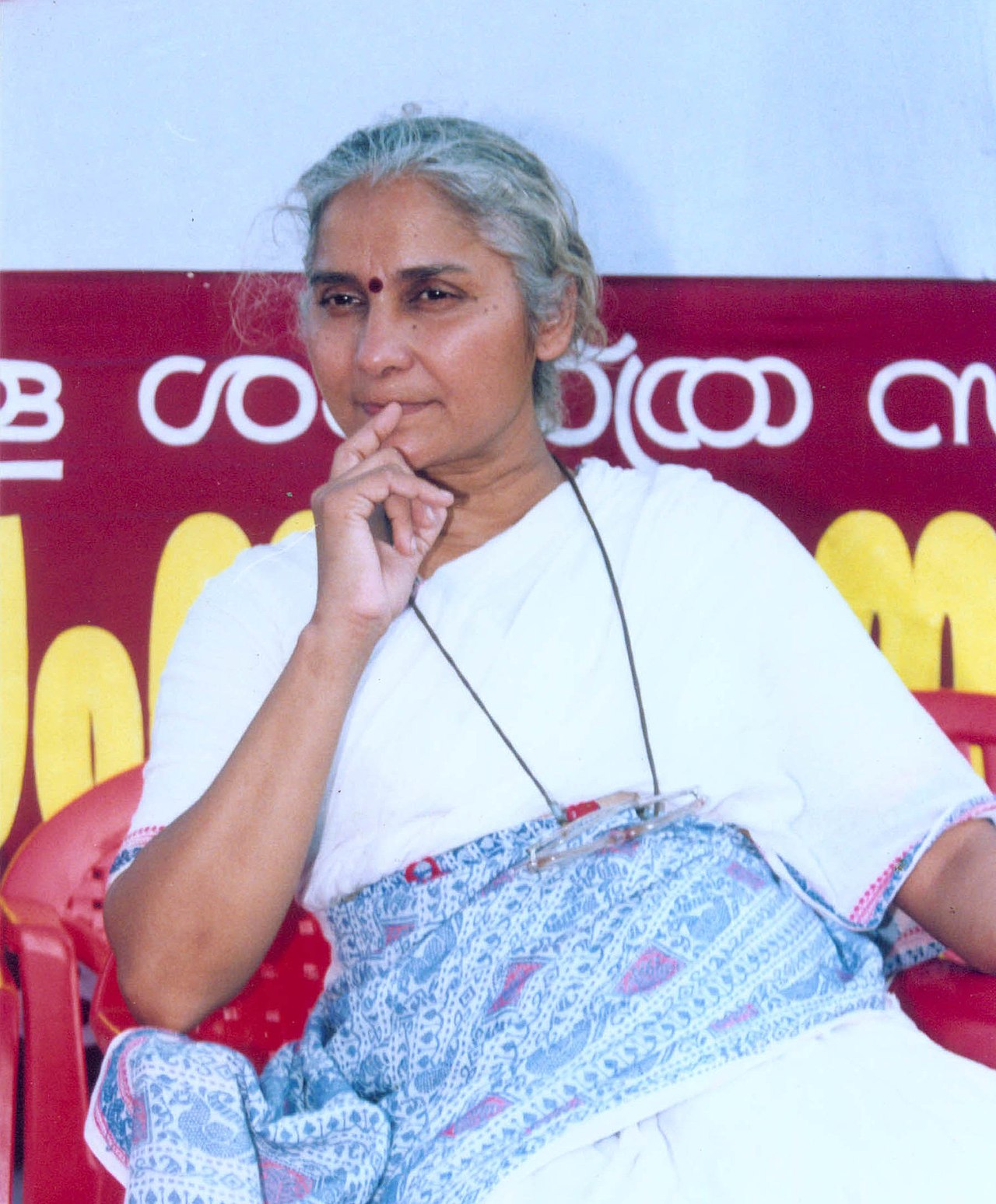 She is a social reformer turned politician. Born in Mumbai, Medha had a keen interest in public service at a very early age. Being a daughter of a trade union leader, she started understanding the problems faced by the underprivileged and felt the need to serve them. Her father took an active part in the Indian Independence Movement, while her mother was a member of Swadar, an organization formed to assist and support women who are financially weak and helped them in getting educated.

Patkar is an MA in Social Work from the Tata Institute of Social Science. She left her position on the faculty as well as her unfinished PhD when she became completely involved in the tribal and peasant communities in Maharashtra, Madhya Pradesh, and Gujarat. She is best recognised as the founding member of the famous Narmada Bachao Andolan – a movement to save the rivers and people of Gujarat. As a candidate for Aam Aadmi Party in 2014, she received 8.9% of the votes. She resigned from Aam Aadmi Party’s primary membership on March 28, 2015.

Born and bred in the holy city of Amritsar, Punjab, Kiran Bedi is a social activist and the first woman IPS officer in the country. She has not only served her department with full conviction but has also made whole-hearted contributions to many social causes. A former tennis player, the multi-talented social activist from Amritsar is credited for bringing down the number of crimes against women in West Delhi during her service.

She introduced several reforms at Tihar Jail, which gained worldwide acclaim and won her the Ramon Magsaysay Award in 1994. In 2003, Kiran became the first Indian woman to be appointed as a Police Advisor to the Secretary-General of the United Nations in the Department of Peacekeeping Operations. She resigned in 2007 to focus on social activism and writing. She has written several books and runs the India Vision Foundation.

She is an Indian lawyer and a well-known women’s rights activist. Her parents have had a major impact on her. Her mother was a freedom fighter and her father was a self-made man. She obtained a law degree at an early age and started practicing law.

She is known as a maverick lawyer who fights against sensitive issues such as child labor, house and control, sexual violence at work, domestic violence and prisoner’s plight. She has also contributed to organizing various unincorporated sectors.

She has been a member of the dictionary committee for English-Kannada translation. She is the first woman to be elected in the past 50 years to the Karnataka Bar Council as Chairman of the Bar Association. Pramila has represented a sweep of cases from high profile to controversial cases for which she has often faced severe criticism. 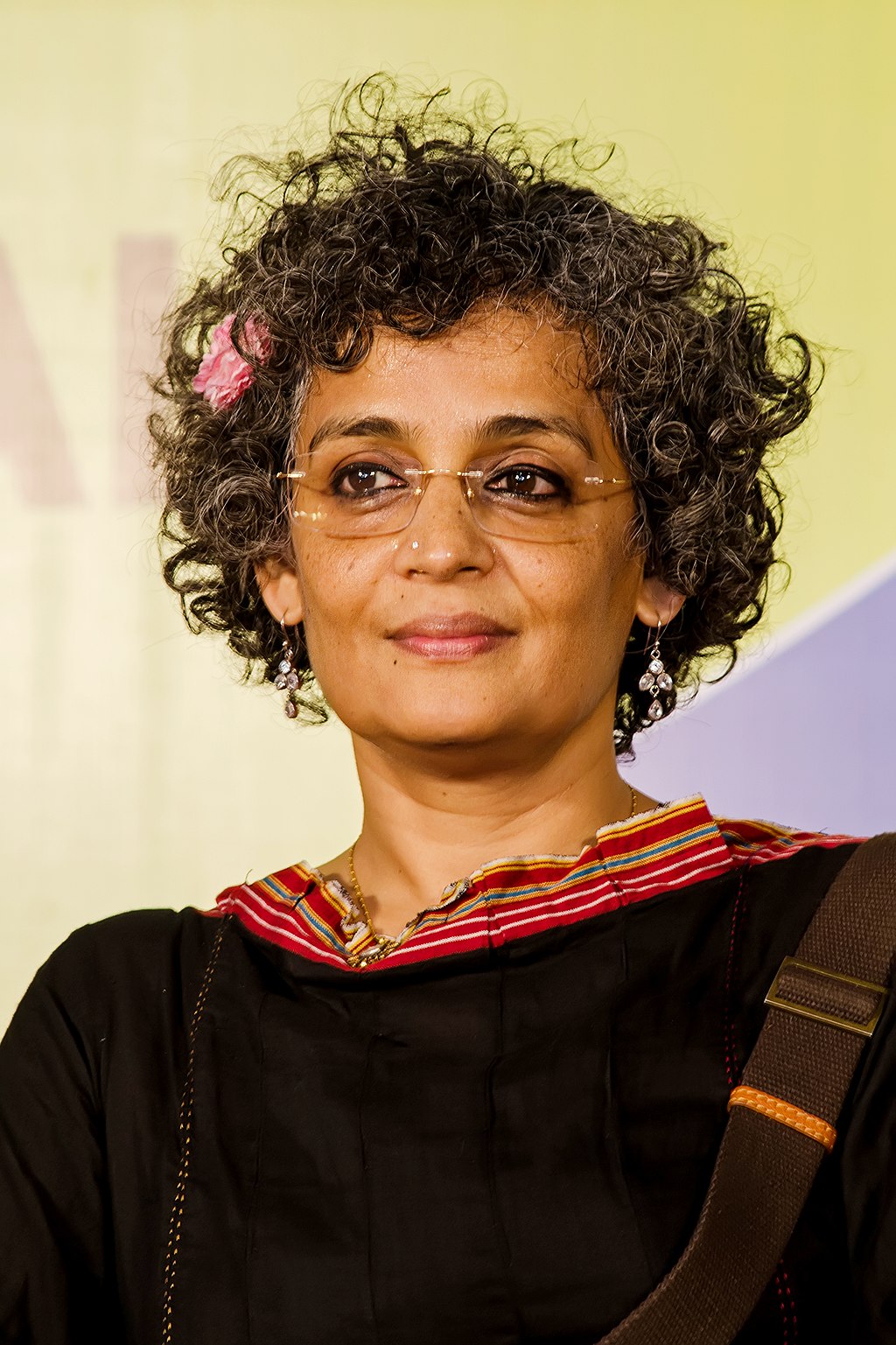 An author, actress, and political activist, Arundati Roy was best known for the award-winning novel The God of Small Things (1997) and her involvement in environmental and human rights causes. Arundhati’s father was a Bengali tea planter, and her mother was a Christian of Syrian descent who challenged India’s inheritance laws by successfully suing for the right of Christian women to receive an equal share of their father's estates.

Though trained as an architect, Arundhati had little interest in design; she dreamed instead of a writing career. She has campaigned along with activist Medha Patkar against the Narmada dam project, stating that the dam will displace half a million people, with little or no compensation, and will not provide the projected irrigation, drinking water and other benefits.

In recognition of her outspoken advocacy of human rights, Arundhati was awarded the Lannan Cultural Freedom Award in 2002, the Sydney Peace Prize in 2004, and the Sahitya Akademi Award from the Indian Academy of Letters in 2006.

A former film actress, Bharatanatyam dancer, animal welfare activist, and mentor to budding film students, Amala was born to an Irish Mother and a Bengali father. Very early in life, she understood the importance of being self-governing and cultured. Her father, an ardent follower of Mahatma Gandhi, taught her to be self-sufficient and fiercely independent.

The unconventional upbringing by both her parents has had a great impact on her life. She is also a strong promoter of vegetarianism and is the Co-founder of The Blue Cross of Hyderabad, an NGO in Hyderabad, which works toward the welfare of animals and the preservation of animal rights in India. In 1992, she married Nagarjuna Akkineni, who is a Telugu superstar.

She has long since walked away from the glitter of movie stardom and entered the hapless world of Hyderabad’s sick, beaten and homeless stray animals hoping to make a difference in their lives.

She is an Indian campaigner with Stop Acid Attacks and a TV host. Laxmi is an acid attack survivor and speaks for the rights of acid attack victims. She was attacked in 2005, at age 15, by a 32-year-old man whose advances she had rejected. She has also advocated against acid attacks by gathering 27,000 signatures for a petition to curb acid sales, and taking that cause to the Indian Supreme Court.

Her petition led the Supreme Court to order the central and state governments to regulate the sale of acid, and the Parliament to make prosecutions of acid attacks easier to pursue. She is the director of the Chhanv Foundation, an NGO dedicated to helping the survivors of acid attacks in India. Laxmi received a 2014 International Women of Courage award from US First Lady Michelle Obama. She was also chosen as the NDTV Indian of the Year.

She is also the face of Viva and Diva, promoting all girls to reflect on their inner beauty rather than their exterior appearance. 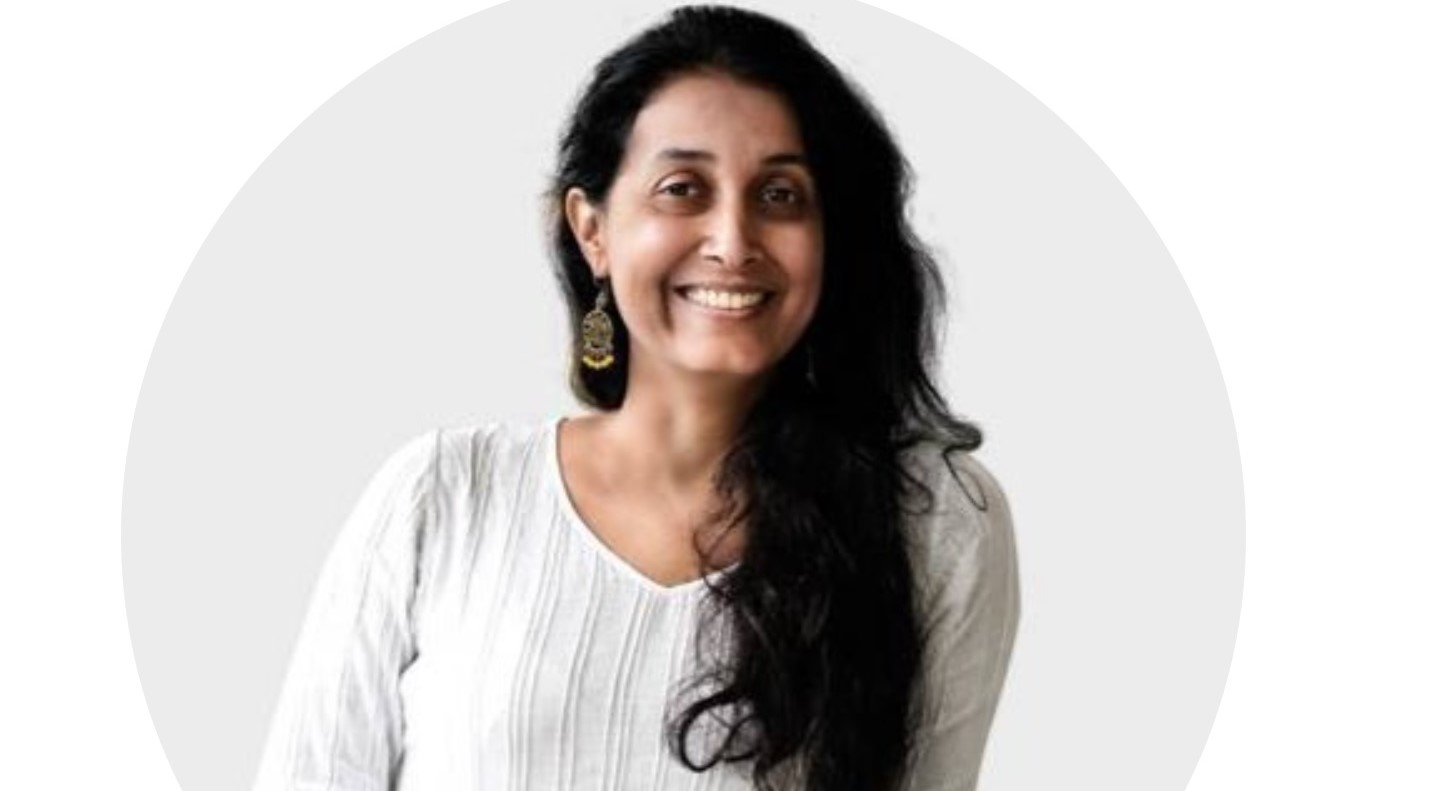 A Mumbai-born woman, Shaheen Mistri earned global recognition for her devotion and commitment to fighting for educational equality in society and also the educational facility that Mumbai's slums lack.

She founded the first Akanksha Center in 1989, a non-profit education project that provides after-school tutoring to children from low-income communities. As the recognition of Akanksha’s work grew, Shaheen saw an opportunity to expand her reach even further and work for more transformative changes; she launched Teach For India in 2008. Since then, the organization has recruited, trained, and placed nearly 1,700 Fellows in schools across seven cities.

Shaheen is an Ashoka Fellow (2001), a Global Leader for Tomorrow at the World Economic Forum (2002), and an Asia Society 21 Leader (2006). She also serves on the boards of Ummeed. Shaheen has a Master’s Degree in Education from the University of Manchester, England. 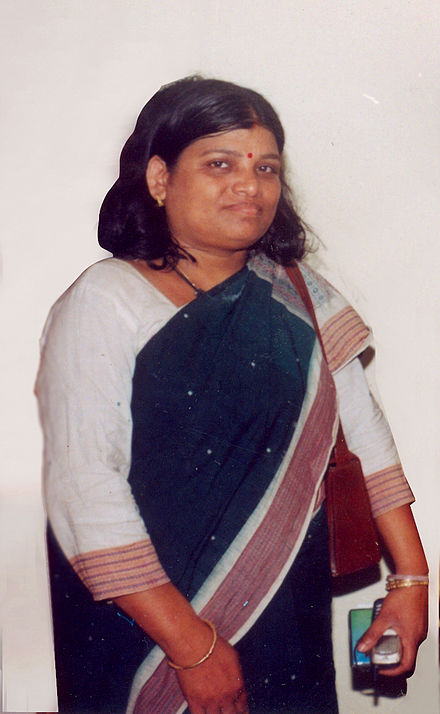 She is an author and poet who received the Rani Lakshmibai Stree Shakti Puraskar in 2013 for her work in fighting for women's rights. Born to a poor family in the state of Odisha, she traveled 15 km daily to the only school in the entire region.

Manasi was the first woman from her village to earn a law degree. She has won many accolades including the ‘Outstanding Women Award’ in 2011 from the United Nations UN Women and National Commission for Women. She is the founder of Nirbhaya Vahini and OYSS Women and heads the Honour for Women National Campaign, a nationwide movement to end violence against women in India.

She is also serving on the panel of the Central Board of Film Certification (Censor Board) for India. She is a member of the International Governing Council of the World Women Organization (WWO) and the Inquiry Committee of the National Commission for Women.

All images sourced from Wikipedia.org

Roshini Muthukumar, a native of Chennai, started her career as a content writer but made a switch to journalism to pursue her passion. She has experience writing about human interest stories, innovative technology, entrepreneurs, research blogs, and more. Previously, Roshini has done internships with The Hindu, Metroplus and worked as a correspondent with The Better India.

Suggest a Story: If you have similar story to refer, Please fill in the form